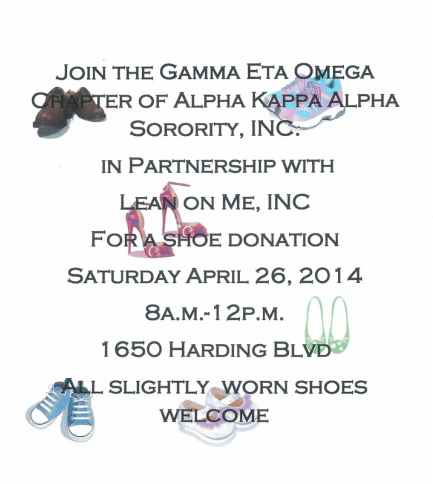 On December 20, 2013, Gamma Eta Omega sorors volunteered at St. Vincent de Paul. In our aprons, gloves and hairnets, over 400 adults and children were greeted and served food during this holiday season.  We made our monthly charitable contribution of $50.

Breakfast with Santa" and "Toy Drive"

Gamma Eta Omega, Beta Psi (Southern University) and Baton Rouge Minority Firefighters prepared 80 Thanksgiving boxes for distribution to families within the community on Wednesday, November 20th. Boxes were prepared and distributed at the Gamma Eta Omega Sorority House (1605 Harding Boulevard). Groceries were purchased from a local retailer with funds contributed by Baton Rouge Minority Firefighters and Gamma Eta Omega chapter. Each minority firefighter purchased the turkeys. This is the 6th year for the collaboration.

On August 16, 2013, twelve (12)  sorors volunteered at St. Vincent de Paul. We adorned our aprons, gloves and hairnets. During our two hours, we greeted and served food and drinks to 390 adults and children. If there were clients with disabilities or small children we took the food and drinks to them. We make a monthly charitable contribution of $50. Sorors enjoy fellow-shipping with the clients, staff, and each other.

Gamma Eta Omega Chapter launched its program initiative aimed at addressing global poverty. For the first quarter of 2013, members concentrated on making dresses for girls in the country of Liberia. Noticing the need for basic essentials, such as clothing, members made over 100 dresses from pillowcases. We partnered with apparel and merchandising majors and textile majors of Southern University, also members of the Beta Psi Chapter. Financial donations, pillowcases, trimming and other materials were collected at meetings. This project was a success with sorors as they were able to use their sewing skills and provide tips to the younger sorors.