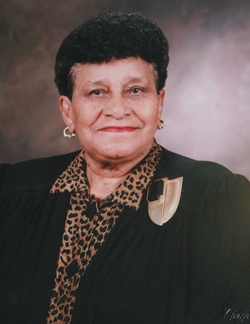 She received the bachelor of science degree, with honors, from Allen University, Columbia, South Carolina. In 1963, this university cited her the “most distinguished service by an alumnus.”  Since earning the master’s degree from Atlanta University, she has done advanced study at seven prestigious universities and received eight honorary degrees.  A few years ago, Educator Purnell retired from her position, of many years, as professor of education at Southern University, Baton Rouge, Louisiana.

In recognition of her untiring  “service  to  mankind“, she is listed in the International Dictionary of Biography, Who’s Who of American Women, Who’s Who of Black Educators, and Ebony as one of the 100 most influential Black Americans - 1979,1980,1981, and 1982. The honors and awards received by Soror Purnell are too numerous to cite, for she has received at least one distinguished honor per year since 1959.

Soror Purnell has served as both Southern Area Director and National President of the Links, Incorporated. Currently, she serves on the Board of Directors of the United Negro College Fund, Black Women United, National Association of Minority Women, and the Young Women’s Christian Association.

Soror Purnell, a devoted church worker, is dedicated to God and His program. She is a devout Christian who, throughout the years, has held tenaciously to the tenets of the Christian faith as first exposed to her by her late father, who was a Methodist minister. She is an active member of the Bethel African Methodist Episcopal Church in Baton Rouge, where she served (volunteered) as organist for ten years.

Few women, past or present, have earned the distinction, respect and admiration attained by Soror Purnell. Twenty-seven other women share with her the unique and honored position of having served Alpha Kappa Alpha Sorority, Incorporated as International President. Upon becoming the sixteenth International President in 1962, she had served the sorority in almost every conceivable position – to cite a few: Chapter President, Vice-President, Parliamentarian, Undergraduate Chapter Adviser, Secretary, and Director of the Southeastern Region. It was during her tenure as International President that she negotiated and signed a four (4) million dollar contract for the Cleveland Job Corps, one of the first job corps for women. In 1985 this corps, which become a national model, celebrated its twentieth anniversary.

Soror Purnell played a very significant role in the struggle for civil rights as a participant, at the invitation of Presidents John Kennedy and Lyndon B. Johnson, in White House conferences. International President Purnell presided at the establishment of the Nassau Chapter in the Bahamas, convened the first Undergraduate Leadership School in Zion, Illinois in 1965, and directed the preparation or revision of fifteen manuals, handbooks, and other sorority documents.

Julia Brogdon Purnell was initiated into Alpha Kappa Alpha, Sorority, Inc. in Beta Zeta Omega Chapter and transferred to Gamma Eta Omega Chapter during its early years. She continues to serve this chapter, the sorority, and all mankind with a sincere, untiring, and heartwarming regard for the principles and merits that underlie the founders’ visions.

Soror Purnell serves as Director of the Scott-Gilchrist Quality of Life Center at Bethel AME Church of Baton Rouge. Soror Purnell, working through the humanitarian spirit of its founders, is completely committed to the overall goal of the Center, which is to improve the quality of life of those in need.  As a result of a recommendation from Gamma Eta Omega Chapter, the 59th South Central Regional Conference voted to establish, in honor of Soror Purnell, the JULIA BROGDON PURNELL HUMANITARIAN AWARD. This award, the first of its kind for the South Central Region, is given to a graduate soror in the region upon recommendation by her chapter.

Soror Purnell became an Ivy Beyond the Wall at the age of 97 on Monday, October 21. 2013. Her vibrant and unfaltering dedication to the sorority and her service to humanity have indeed earned her the title, “Soror of Sorors.”

In Loving Memory of

"You are a cornucopia of scintillating elegance, prestigious stances, perspicacious minds, altruistic souls, and economic opulence represent the summum bonum in brains, beauty, power and service to all mankind."  – Julia Brogdon Purnell
Below is a photo tribute in her memory.